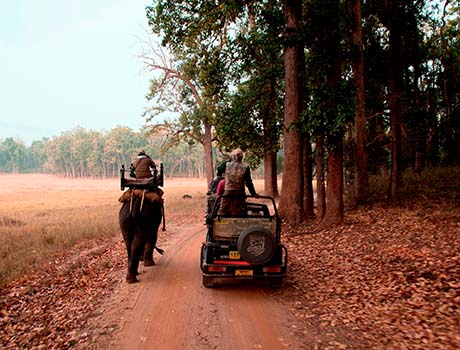 Kanha National Park is nestled in the Maikal range of Satpuras in Madhya Pradesh – the central Indian highlands that form the heart of India.The national park was created and is popular as the Tiger reserve and has been declared as one of the finest wildlife areas in the world. Spread across two revenue districtsthe Mandla and the Balaghat and covering an area of 1945 sq km, the Kanha National Park was declared a reserve forest in 1879 and revalued as a wildlife sanctuary in 1933. Its position was further upgraded to a national park in 1955.
The landscapes and the surrounding luxurious meadows along with the wooded strands and the dense maroons of forests offer magnanimous sightseeing experiences for the nature lovers. Making the land more beautiful and adorable, the clear streams amidst the dense jungle cleanses the surroundings and makes the wildlife unrivalled. This vivacious land has been the source of inspiration for Rudyard Kipling, a famous writer for his outstanding creation,The Jungle Book.
The Kanha National Park is the ideal home for wide ranges of wild creatures from the mighty tigers to the barasingha and countless species of plants, birds, reptiles, and insects. This reserve has fascinated many travellers around the world with its well-developed and well-maintained infrastructure.

Every year, the Kanha National Park is open for visitors from the 15th of October till the 30th of June. As per the climate of Central part of India, the peak season to visit the Kanha National Park is during winters – from October to March. The period between November and February is excellent for visiting Kanha as the rain fall during monsoon rejuvenates all the nature and vegetation. This period is particularly great for bird watching as a lot of migratory birds visit the park during the winter months.
During the time period from March to May most of the vegetation at the Kanha National Park gets dried and sighting of the tiger gets relatively easier than it is in winters. The month of March is the best month for wildlife viewing as the temperature is not very high.However, April & May are great for wildlife photographers, giving them an opportunity to photograph the largest member of the cat family in its natural routine and form.